Since my last post introducing the new London Lives petitions project, I’ve released a slightly updated version of the data: I added some petitions and letters I’d missed on the first sweep and removed a few documents that were either not petitions or were so fragmentary that they were not worth retaining.  There are now 10,187 petitions and petitioning letters. (You can download the latest version at the project’s github page.)

In addition, the project now also has a homepage at my own website, where you’ll find a growing number of data visualisations and resources (and sooner or later there’ll be some sort of search facility).  The visualisations I’ve done so far present some fairly basic counting, aimed at getting an overview of the petitions over the period 1690-1799, where there are gaps, whether there are any interesting patterns that point to questions worth closer investigation, and so on. (In most cases, I’ve left out the handful of petitions from the Old Bailey Sessions Papers.)

This one, for example, aims to give some sense of how the petitions fit into the Sessions Papers as a whole. 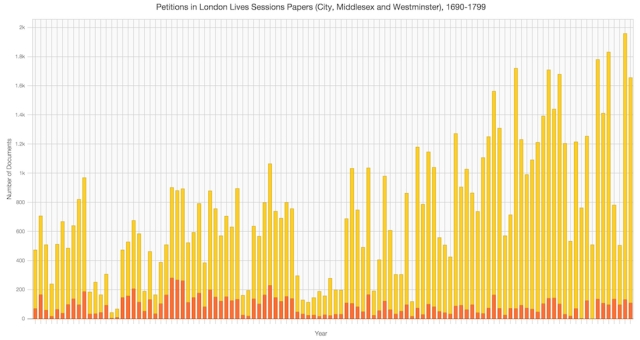 (I should note that, while I have an accurate count of documents in the petitions subset, it’s hard to ascertain that precisely for the rest, because some documents have multiple pages but London Lives doesn’t have any markup for that, only for images.  The markup does contain a tag () to indicate where text spans two pages, but that isn’t quite the same thing, because it’s not used where a page break coincides with a paragraph break. So the count for the larger body of documents will inevitably be slightly too high. However, I think it should be close enough, and consistent enough, to serve this purpose.)

A few things jump out from this graph: firstly, there is a noticeable peak in petitions in the mid-1710s and an equally noticeable decline from around 1740, especially relative to the overall business of the courts. Secondly, there are hardly any petitions for almost a decade from the late 1730s. On breaking down numbers by court, it’s clear that this is due to significant gaps in the Middlesex series of Sessions Papers, which accounts for around 3/4 of the total petitions. The Middlesex SPs during that period survive patchily, and those that do survive contain relatively few documents, and almost no petitions at all. Also, most of the Middlesex files that are missing from London Lives because the LMA archivists deemed them “unfit” for microfilming are from the same period. 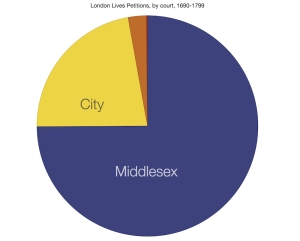 So it’s clear that the gaps are all about problems with record survival. The Sessions Papers were not a record of the court’s formal business (like indictments or books of court orders) or of financial commitments (like recognizances). They were really just random Stuff™. So their chances of long-term survival could be haphazard and dependent on the preferences of individual clerks. As I’ve already mentioned, some petitions have survived only in fragments (example), and the poor condition of some documents is a reminder that the bundles of papers were not always kept in ideal conditions.

For the same reason, I’m wary of reading too much at this stage into the apparently exceptionally busy petitioning years 1715-17, but it does suggest they’ll be worth a closer look, especially as this was just after a period of regime change and some political turbulence. On the other hand, I do think the fall in petitions’ numbers (and even more so as a proportion of the whole) from mid-century is sustained enough to be significant, if not necessarily straightforward to explain. Perhaps there really were fewer petitions, or perhaps clerks of the peace thought them less valuable and were less likely to keep them. (It also suggests that I may need to explore what’s in the rest of the Sessions Papers, a much larger undertaking that I didn’t really want to try at this stage!)

The other interesting counting exercise has been to measure the length of petitions, using a scatter plot for word counts similar to one previously used for Old Bailey Online trial lengths. (The first iteration of this exercise was incidentally very useful in identifying fragments and short non-petitions and the graphs now on the website represent a second attempt.) Because there is a dot on the graph for each petition it also shows quite neatly the fluctuating numbers of petitions. While the bulk of the petitions were less than 500 words in length, there were small numbers of much longer petitions, so there are two versions of the same graph. The original one uses a linear scale, which I find useful for seeing the overall range; the second (below) a logarithmic scale, which gives a more detailed picture of the range within which most of the petitions fall, making it clearer that in the second half of the period, there are fewer short petitions. 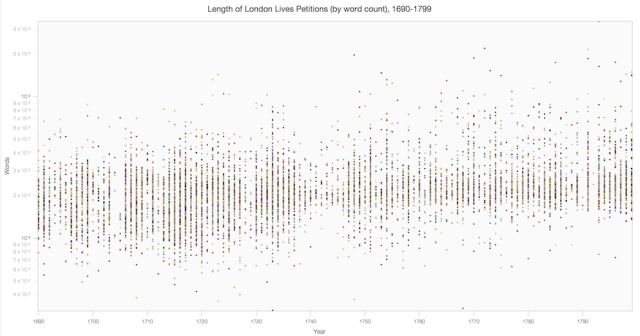 Does that account for the smaller numbers of petitions overall? Perhaps the clerks were choosing to keep only the more substantial petitions. But then again, it might be a sign that petitions were becoming (even) more formalised, less likely to be used by individuals than institutions. The longest petition in the dataset (1793), at nearly 3400 words, is by an official and concerns a breach of building regulations.

So, next on the agenda is to start exploring the actual content of the petitions!

The visualisations so far have been done with d3plus, an extension to the D3.js javascript dataviz library. D3 is amazingly powerful but really hard to learn and use, and d3plus has made the learning curve much less steep (though you’ll still have to work out how to get your data into the right shape). I’m also trying out dimple, another “D3 for Javascript Dummies” resource.

Early Modern Crime and the Law